Testing of CANopen devices via USB and Ethernet 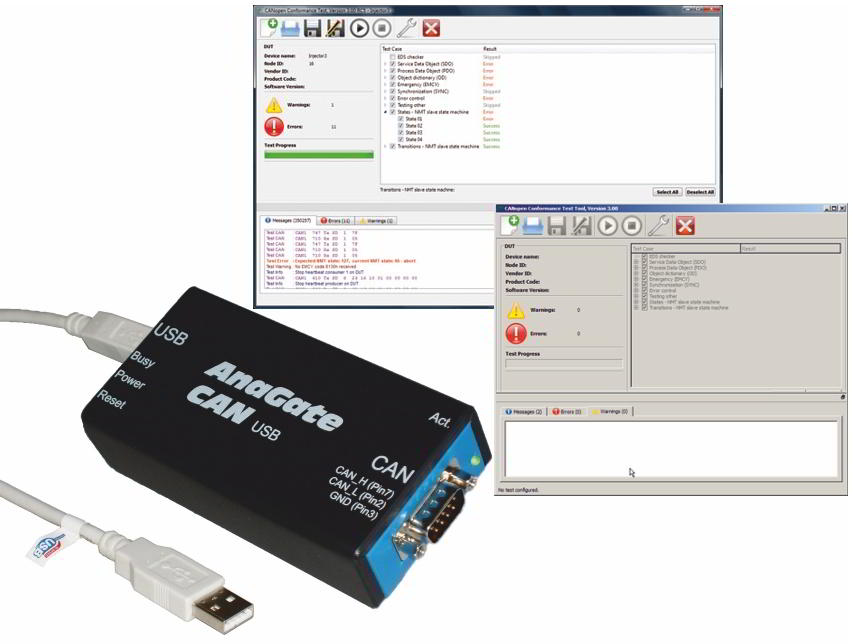 CANopen is a standardized communication protocol for embedded applications based on the CAN field bus. Manufacturer of CANopen devices check the compliance of their hardware implementations to these CANopen standards by conformity checks. This can be done by using an official test tool, the CANopen Conformance Test Tool.

CAN in Automation (CiA) provides a CANopen Conformance Test Tool (CTT), which checks the device conformity to the CANopen specification CiA DS301. The tool may be used by members and non-members of the user group. The CiA itself uses the tool to make interoperability tests and for certification of CANopen devices.

The tool in actual version 3.0 is running on a windows pc und needs a CAN hardware adapter and a COTI.dll (CANopen Testing Interface). The COTI library for AnaGate CAN adapters are included in the scope of delivery of the CTT. The newest version of the library can additionally downloaded from the support pages of Analytica for free.

All AnaGate CAN bus adapters of Analytica can be used together with the CTT of the CiA.  Here should be emphasized that the interconnection to the CANopen device can be done over ethernet by using one of the AnaGate models providing an ethernet interface.

Please contact us, if you need further information about our gateways.

More news
Access to CAN bus by WLAN/WWAN
CAN adapter with up to 8 CAN ports
Support of SocketCAN under Linux
Test of CANopen hardware with AnaGate CAN products
Universal Programmer 2.0 with increased power
CAN-USB-Gateway operates stand-alone